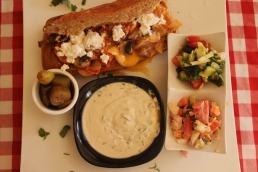 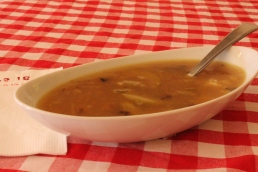 I love women chefs. I love women who take traditional cooking out of their homes and into the streets of Tel Aviv, asserting that home cooked classics are worth a few shekels. After perfecting the recipes, these women transform familiar plates into a meal acceptable for city standards. Often this implies re-imagining the concept of the dish. Shakshukan does just this. They serve shakshuka…. in a bread bowl.

Adi, the enthusiastic and warm hearted owner of this little trinket on the corner of Hess and Allenby, only learned to cook after ditching her criminology and journalism background a few years ago. She had needed a change, and as she stated with great simplicity, she turned to food because, “food makes people happy.” Unfortunately, at the time of this realization, her star creation in the kitchen was the omelet. So she became a restaurant manager… and then a restaurant owner… and only at her third establishment, when she finally got sick of all the temperamental chefs, did she learn to take the pan into her own hands. Shakshukan marks her fourth stab at being a restauranteur, and this time, she is 100% in charge.

It takes quite the chutzpanit to open a restaurant devoted to shakshuka with such little cooking experience. So often in this country, the dish is served as a side note, every restaurant’s attempt to keep customers happy by saying “Oh, PS, just in case you don’t like anything else on the menu: we also have shakshuka!” But Adi knew she wanted to serve shakshuka when she found the vacant space on Hess, because only home cooked food like shakshuka could complement this cozy nook. And besides, her daughter likes shakshuka. So Adi dove right in- tasting, adding ingredients, coming up with the idea for a bread bowl instead of the typical pan service- and two weeks ago opened her very own shakshuka joint, complete with 10 different varieties of shakshuka.

Adi explains that learning to make shakshuka felt like being a painter with a blank canvas; she did not really know how the end product would turn out, but with the shuk just down the street, she didn’t mind the uncertainty. It was exciting to buy fresh vegetables every day and experiment. While the basic shakshuka base taste remains the same, Adi adds special ingredients to give each option its own character. This might mean highlighting a certain meat or vegetable- like chicken in the “chicken shakshuka”, or black olives in the “Italian” option- as the distinguishing factor of the bowl. Her favorite shakshuka on the menu is her shakshuka sabich, complete with grilled eggplants and potatoes. I tried one with cilantro and fresh parmesan. The tomatoes were seasoned but not too spicy, the eggs were perfectly cooked so that the yolk wasn’t too runny, and the parmesan added an Italian flare to each bite. No matter what your preference, the menu boasts a shakshuka for every palate: for the vegetarians and the meat lovers among us, for a traditional breakfast with the morning paper, or for a heavier dinner plate with wine chosen specially by Adi. She’ll even add some homemade tahina, just for good measure. And the best part? The bread bowl. The tomato sauce drips into the bowl, so that the bread moistens with sauce and spice.

Places like Shakshukan remind me that I don’t need fancy fare to enjoy my food. In fact, I’d rather feel like I’m in a home, where the dishes always change and my mother serves us with love. It is this reminder of simplicity and comfort that will keep Shakshukan a worthy addition to the bustle and noise of central Tel Aviv.